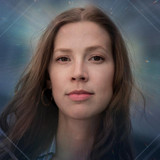 Norwegian born Sofia Aarvik grew up with a deep love for soul music. Inspired by artists like Ms.Lauryn Hill and India.Arie she started playing the guitar and writing songs at an early age. After years of developing her sound into something best described as Nordic soul/pop, she met the Brazilian producer Peter Mesquita. They started working together, and produced her debut album together with producer and keys player André Viervoll in Oslo . October 2019 her first single Push And Pull was released, followed by Not Uncomplicated, Summer Child and All That You Have Is Your Soul. They were all

warmly received by the Scandinavian soul community and beyond. "Sofia sails through the increasing 'sweet sounding' Norwegian waters, with both singles steered by her appealing R&B flavoured vocals.(...) Sofia’s wonderfully rich voice has compelling depth – beautifully warm and endearing." (ScandinavianSoul.com) The full album "All That You Have" that was supposed to be released in 2020, has been delayed until early 2021 due all the changes in the world this year.