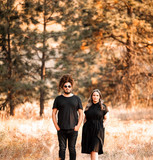 Josh + Bex are a Canadian Dream Folk duo out of Kelowna BC. Their spellbinding harmonies and honed yet rustic sound, meet at the intersection of hope and sorrow – giving space to let their songs explore light, love, pain, and the awe-inspiring wonders of Mother Earth. The duo have performed at the internationally acclaimed Salmon Arm Roots and Blues Festival. In 2021, Josh + Bex won silver in Best of Kelowna Musician (Kelowna Now), giving them wide recognition throughout the Okanagan Valley.

Josh + Bex released their self-titled EP in October 2019 and have a follow up sophomore record, Far Away But So Close, set to be released in the spring of 2022.