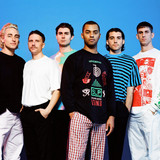 After bursting onto the scene in 2010 when they won national youth broadcaster triple j’s “Unearthed” competition, Northeast Party House found a devoted following -- particularly among their fun-loving millennial peers -- fast. A 2011 self-titled EP was followed in 2014 by hit debut album Any Given Weekend containing anti-authoritarian anthems “Youth Allowance” and “Any Given Weekend”, and in 2016 they released second album Dare, revealing a growing maturity and complexity to the band’s sound without losing any of their infectious energy.

Over the past ten years, Northeast Party House have performed on festival stages and sold out headline gigs throughout Australia as well as playing to thousands of fans across Europe and the US. Now, following a three-year hiatus, they’re back with their most sophisticated album to date, Shelf Life. Mixed by Drummer Malcolm Besley, the record was motivated by a desire to create “huge dance moments” paired with their most thoughtful, personal lyrics yet. Fun is still on the menu, of course -- the title track is about a 17-hour bender in a Berlin club -- but there’s plenty of space for reflection, too, about relationships, accountability and the inevitable lows that follow extreme highs. In short, it’s the sound of a group of young artists making the best music of their already impressive career. Shelf Life might be the work of a great party band, but it’s also smart enough to resonate on and off dance floors all over the world.