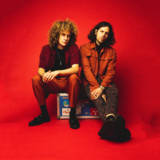 The band began busking on the streets of York, before heading to almost every corner of the UK, quickly amassing a loyal and devoted following, who appreciate their no-nonsense, back-to-basics brand of self-promo. Such was strength of those first initial ripples, that they rapidly became waves, and since, the band have found themselves selling thousands of tickets every tour playing headline shows at the likes of Manchester’s Academy 2, Oslo in London, and Sheffield’s Leadmill, while winning over fans at festivals such as The Great Escape, Reading & Leeds and SXSW, not to mention countless other support slots for the likes of Metronomy , Ghostpoet , The Sherlocks as well as German band Razz

across their 1,000 cap European venue tour that continue to cement their reputation as one of the UK’s best loved touring bands. Industry has been quick to support with their singles garnering playlist support from Spotify’s The Indie List, Hot New Bands and New Music Friday UK, Deezer’s Indie Jukebox and Freshest Bands Around; not to mention placements with Starbucks and BT Sports amongst others.