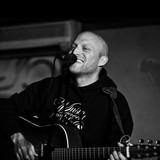 Originally from Johannesburg, South Africa, Gil Hockman is a folk/indie/electronica musician. Since the mid-90s Gil has played a variety of roles in the music world: starting off as a cultural journalist and photographer before moving into the live music scene, first a venue and event promoter and then eventually as the owner of the influential Cape Town venue The Independent Armchair Theatre. All this time Gil was a member of the renowned art-rock group The Buckfever Underground whose releases in the late 90s and early 00's were considered to be among the most significant in the South African alternative scene. Since 2009 Gil has also been working as a solo artist, releasing several albums, composing soundtracks and playing hundreds of shows across Southern Africa and Europe. In 2017 he relocated to Berlin, Germany where he continues to write, record and tour his own music as well as producing and mixing various other projects. Gil also runs the Duh Dum! PR agency and develops various workshops for independent musicians.