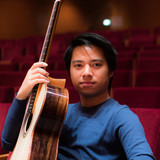 Praised for his “gorgeous playing” with “flawless technique” by the KnoxTNToday and considered as a “Vietnamese guitar virtuoso” by Austin Classical Guitar, guitarist An Tran has captivated audiences throughout North America and Asia. Deeply connected to his native country of Vietnam, An is bringing the traditional music of Vietnam to international concert stages. Most recent seasons brought An to different parts of the world, including recitals for Bangkok Guitar Society, Austin Classical Guitar, Toronto International Guitar Series, and many more. Current 2019-20 season highlights include An’s Midwest tour with concerts in Wisconsin, Illinois, Indiana, as well as solo concert at the IX Latin-American Guitar Festival and the prestigious Segovia Classical Guitar Series in Chicago, USA in May 2020. An has won over 13 international guitar competitions and music awards and has been invited to various guitar festivals to teach, perform and judge. An Tran is an exclusive artist of D’Addario & Co and managed by Classics Alive Artists in Los Angeles, USA. www.antran.org/