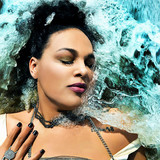 Serafia pronounced (sah-rah-fee-yah) is a world-class jazz, blues and soul singer/songwriter with a distinctive rich texture, surgical delivery, and a 4 octave range. She has been a back up singer for numerous acts, including top 40 Grammy winning duo, The Chainsmokers and has opened up for acts like The Temptations, The Beach Boys, Cece Peniston, BWB, Rick Braun and Taylor Dayne. In the 2018 and 2019 MLB season, Serafia sang the National Anthem for The Dodgers at Dodgers Stadium. As a writer, Serafia has penned national theme songs, including the theme song for the hit show Empire Girls which aired on The Style Network and earned her first IMDb credit. Her music is also featured on the independent film, The Bygone, which released in November 2019 and was written & directed by broadway actor, Graham Phillips. Her debut album, Water Sign Lullabies, is a hauntingly dramatic mix of jazz, blues, soul and avant-garde and touches on topics like empowerment and social activism.