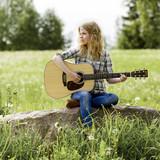 Maria Lappi is a Finnish singer-songwriter, whose heart burns for Christian music. Since starting to play the violin at the age of 3, music has been an essential part of her life. As a teenager, she began to write her own songs and realized she had found a unique way for expressing her thoughts, experiences and feelings. Eventually Maria became a professional musician and singer, but most of all, being a singer-songwriter is what combines all her passions: music, writing and singing. Maria’s deep lyrics, ear-catching melodies and nuanced voice make her music recognizable and appealing around the world. In addition to her solo project, Maria has previously performed and recorded her songs with a group called Kajaste. They released their distinctive acoustic pop music on one album, Auringon alla, in 2009. Maria’s contemporary Christian pop music has got a good reception in her native country, particularly on Finnish Christian radio. Three songs from her debut album are available also in English on the Flashes -EP.