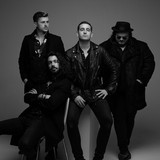 What is the Kingswood sound? Is it the brazenness of the guitars that drove their debut album Microscopic Wars? Or perhaps the melodic, vintage sounds of their sophomore effort, After Hours, Close To Dawn; or even the darkly enticing pop threshold crossed with 2018’s ‘Messed It Up’ release. It’s the sniff of rebellion and the taste of a challenge that has spurred Kingswood on across an almost decade long career. A creative hunger that threads each release together. Defined by simply being undefinable, the Melbourne band has been on a journey of discovery and creative growth since the ARIA nominated Microscopic Wars put Kingswood on the national radar in 2014. Establishing themselves as one of Australia’s most formidable and engaging live acts, Kingswood’s drive and ambition in reinventing and flourishing within the realm of new sonic influences has remained at the centre of their work. Being musically unbound can indicate chaos, but as Kingswood approach the completion of their third studio album with excitement, the distillation of this musical chaos into this new snapshot of the band, is one Kingswood is proud of. Recorded in Australia, the US and in Europe, the as-yet-untitled album is demonstrative of a warped kaleidoscope of influences that have permeated through years of experience on the road, in the studio and behind the production desk. In some ways, the era of Kingswood 3.0 is one that has come full circle.