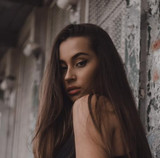 This is Cheska Moore. From South London, Cheska combines her own brand of alternative pop with unique, mystifying vocals and raw, genuine song-writing with unlikely instrument combinations. Inspired by the likes of Halsey, Sia, Jessie Reyez, and Lana Del Rey, Cheska’s music is the result of a girl growing up to realise the flaws in the Utopian world that she, and many others, have been led to believe in.   This up and coming artist began gaining the admiration of hundreds of thousands of music fans after posting a series of popular cover songs on Youtube. A stand-out example is her cover of Alec Benjamin’s ‘Let Me Down Slowly’ which boasts over six million views over various social media platforms. Her signature style of re-inventing existing songs into her own sad ‘minor’ version has certainly had her noticed by many.   Cheska’s rare breed of dark, alt-pop is mainly inspired by her own experiences of life. Growing up, she felt like a misfit, often finding solace in the darker side of music. It wasn’t until hearing Sia’s ‘1000s Forms of Fear’ album that Cheska realised there was a huge market for the melancholic side of her creative output.   https://www.cheskamoore.com