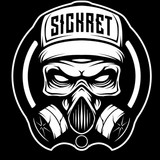 SICKRET BRINGS THE 90‘S NU METAL TO THE PRESENT DAY. THE SOUND IS A MIX BETWEEN KORN LIMP BIZKIT AND DEFTONES WITH INFLUENCE FROM MORE MODERN MUSIC. NU METAL IS STILL ALIVE – SICKRET SHOWS THIS WITH THEIR VARIED SONG WRITING. Hard and uncompromising: Since their foundation in 2010 SICKRET has already played more than 170 shows in 8 countries. SICKRET connect the Nu Metal Crossover- and Hardcore-Genre perfectly and show how this mixture should sound today. Sickret already played further concerts on which they shared the stage with renowned bands like MAD BALL, SKINDRED, JINJER, CRAZY TOWN, CLAWFINGER, JONATHAN DAVIS (KORN) and many others. After the band released their debut album „Pointless Appendix“ which was very well received by the listeners SICKRET got an EMP support deal in 2014 and only one year later they played a tour through Cuba and Eastern Europe. And many other shows in Switzerland and abroad. The two of three LP‘s „Hypocritical“ and „Trapped Behind Golden Bars“ were mixed and mastered by the renowned producer Aljoscha Sieg in the Pitchback Studios. The latest long player even made it into the official Swiss album charts in October 2018.The band is currently working on new songs some shows festivals & tours are already planned for 2021.