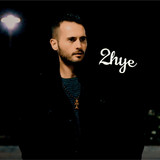 Known as one of the best and first Armenian-American Hip-Hop artists to release original music, 2-Hye's memorable and notable songs date back to 2007, when word began to spread about this young lyrical beast born and raised in the 626 of LA. He then spread worldwide as he evolved with the internet, which helped increase his growing diehard fanbase. A short bio would do no justice to explain 2-Hye's life and his complete back-story, which is where the incredibly large catalogue of all original music is known to verbally paint it for listeners.

1. A Little Past High and a Decade(2007-2015) As a senior at Marshall High School in Pasadena, 2-Hye connected with Mason David Levy (MdL) and released the first solo album, collaborating with his old crew of artists from the Rose Family and 3rd Mass.