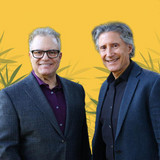 David & Steve Gordon took music lessons together when they were children, and continued the mutual interest through college and beyond. David played the piano, clarinet, and flute, while Steve played the piano, guitar, and drums. They both studied classical music at Los Angeles Valley College and UCLA; at the Grove Music Academy, they expanded their musical horizons by learning modern harmony and jazz from well-known guitarists and keyboardists. The peaceful forests of the Sequoia National Park offered an escape from the busy world of school, and the brothers found a symphony in the sounds of the forests and streams. They envisioned music that would capture the essence of these magical places, so they returned many times to record the sounds of nature. Back in the studio, they blended these sounds with music composed to reflect the serene beauty of the healing environments. They released their first album, Misty Forest Morning, in 1983 on their Sequoia Records label. This definitive best-selling recording was one of the first relaxation albums to combine music with the sounds of nature. They released several similar titles; 1987's Oneness and Garden of Serenity albums. Garden of Serenity is one of the top-selling music/nature albums in history. Their Inner Environment series, Astral Journey and Celestial Suite, moved into new musical territory as the brothers explored the boundaries of electronic space music; their 1993 album, Music of the Tarot, exhibits the best of this series. In 1994, they released Sacred Earth Drums, adding hand drumming, tribal drumming, Native American flutes, and other world instruments to their musical palette. This album was the top-selling drumming album in the new age market for both 1994 and 1995. Sacred Spirit Drums, its 1996 sequel, followed. The following year, the Gordons released Garden of Serenity II in celebration of the album's ten-year anniversary. This year also marked the appearance of a new artist on their label when they released Fairy of the Woods by Gary Stadler. Drum Medicine, which was recorded in the Gordons' new studio, Sequoia Sound, was issued in 1999. It went on to become a top seller for new age distributors and remained in the Top Five for the next two years. In 2002, the Gordons celebrated 20 years of music-making, issuing the collection Sacred Drum Visions, to commemorate their anniversary. Steve also released his first solo album, Drum Prayer. This album featured distinct arrangements of ancient Shaman rhythms, trance beats, and old world chants, and went on to win the COVR award for Best World Album. The brothers' founded Sequoia Groove before the year's end. This electronica label has become well-known for its Buddha Lounge and Café de Luna compilations. Heart of Peace, music for healing, appeared in 2003. Months later, the released of Garden of Serenity III. This mixture blended light woodwind arrangements with natural European elements, continuing the brothers' work with the Inner Music Series. Pillow Music: Natural Deep Sleep, a set created especially for slumberland, followed in 2005. ~ Carol Wright, Rovi