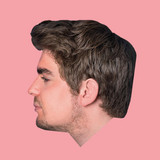 Tim Treffers (1988) is a Dutch singer/songwriter. After starting piano lessons at the age of 9, he sang in local bands. At the same time, he started to take vocal coaching from respected Dutch singers such as Lisa Boray. Meeting composer Tim Vermeulen, back in 2012, marked the start of his professional career as a singer. Vermeulen and Treffers started to write songs together and in 2013 Eric Van Den Brink (Yoko Ono, Gerry Beckley, David Paton, a.o.) joined the team. Recordings began for what was to become Tim’s first album. ‘Never trust a man in a fur coat’ was released in 2015 and received much acclaim in his home country. P-Vine Records decided to release the album in Japan one year after its original release. In 2017, Tim joined the tour of a theatrical rockshow called ‘Invitation to the sound of Earth and Fire’, and he recorded 2 duets with Japanese singer Mimlus Naito Akiko for her album ‘Squame’. Meanwhile, he released his second album ‘Carnival of life’ in Europe and Japan October 18th 2017 and started touring in the Asian country.His 3th album, ‘Young and determined’, recorded with his brand new producer Mathijs Duringhof and musicians as Julia van der Toorn (The Voice) and Lo van Gorp, was released in the spring of 2020. Website: www.timtreffers.nl