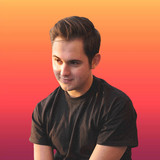 Luke Mock is a 20-year-old singer-songwriter based in the Finger Lakes region of upstate New York. His music is written from a very honest and personal perspective, crafting engaging melodies with stories and emotion while bringing his music to life on stage playing his acoustic guitar. Luke has opened for such acts as AJR, Kesha, Ryan Quinn (The Voice), Neyla Pekarek (The Lumineers), and Joe Whiting (Savory Brown), and was a headliner at the Perform 4 Purpose WinterFest 2019. Luke released his debut single, “Universe” on June 12, 2020. "Universe" received favorable reviews, one of which highlighting, "The simple, clean instrumentals—including the bit of bass highlighted in the background at the minute mark—help Luke create an atmosphere of emotion with skillful inflection as his rises and falls with the music." - Alexa O'Kane On September 25, 2020, Luke released his second single, "Better", a bittersweet folk-pop song about the pain and heartache that remains after a break-up. "Luke skillfully layers subtle synths and additional guitar notes to fashion a lovely soundscape for his fervent vocals." - Jeff Archuleta (ECLECTICMUSICLOVER)