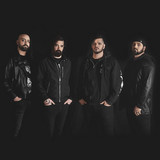 In 2016, LNS, released their first album, “Among The Forgotten” The second album, “Into The Aftermath” was released in 2017 and not only did the group vastly begin building their online presence and catching the eyes of regional promoters. The band was awarded opening slots for National and International acts such as, Drowning Pool, Red, Saliva, Thousand Foot Crutch, Adelitas Way, The Veer Union, Royal Bliss, Flaw, Bobaflex, Shamans Harvest, and so many others! In 2018, continuing a busy regional touring regiment, LNS was named best rock band in Utah and were chosen as 1 of 5 National Finalists for the Cumulus Media “Next2Rock” Battle, a National Competition in Los Angeles.

They flew to Los Angeles to participate in the competition. LNS has seen their Spotify monthly listeners explode to over 100K. Their track “Angel” has over 2M spins on Spotify with 9M spins on thier last record Into the Aftermath. LNS, travelled to Vancouver, Canada to hit the studio with Singer/Producer/The Veer Union Frontman, Crispin Earl to record their 3rd album "From Ruins" with goals of refining their sound and bringing the band to an International level.