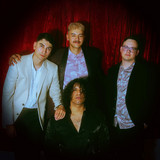 Eyes Ahead, a follow-up to their early 2020 EP Fate, is their new collection of songs that were born out of the pandemic, but Daise doesn’t want them to be strictly tied to this period in our world. Intensely personal and greatly expressive, Daise’s new body of work is clearly their most relatable yet given the events of the past year and half. On Eyes Ahead, Daise honed in on their signature sounds, but also opened up their sonic universe in fresh ways. Songs like “Paint Me Perfect,” “Panic,” and “Ease Up” feature strong syncopated rhythm sections. It’s a darkly sweet and dreamy effort reshaping the different tones and textures they’re inspired by. As they draw from 80s new wave, 70s funk/disco, and 90s indie rock, Daise adds their own modern flair that feels renewed, distinguishable, and grandeur than ever before. In the making of their Eyes Ahead EP, Daise found a spiritual clarity on the significance of being a band —a deep awareness they hope might inspire their listeners no matter how the road looks straight ahead. Daise shares, “The band has always been our only means of truly expressing ourselves, and we also understand that what we're trying to do with our music is much bigger than ourselves.” Reimagined, reinvisioned, refocused, however you want to put it creating new music together again not only symbolized a form of unity for Daise but an unspoken bond of brotherhood they know will last an eternity.