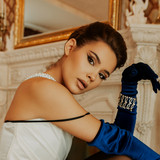 23 year old Yoana is one of Bulgaria's best rising pop-star and was finalist in The X Factor Bulgaria (season 5). In 2017, after her successful participation in the show, she was signed by the country's biggest music label Virginia Records. Her debut song "Da Ne Spim" is a collaboration with Romanian hit-maker Monoir and famous Bulgarian singer Lubo Kirov, who wrote the lyrics. With over 1,8 million views, the track was #2 for 5 consecutive weeks in the Official Airplay Chart and is #5 for the whole of 2018. Yoana was a special guest in the most famous music festival in Bulgaria - Coca-Cola The Voice Happy Energy Tour.