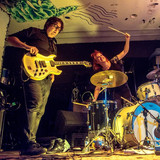 Schwervon! is a two piece American band born on the Lower East Side of New York City. Nan Turner

plays drums. Matthew Roth (Major Matt Mason Usa) plays guitar. They both sing. Their band name is taken from the warped abbreviation of an urban slang, meaning: “to do something well in one’s own way or in a unique manner, usually involving members of the opposite sex.” They have been described as Antifolk, Minimalist Rock, Noise Pop, DIY, and even 90’s Indie Revivalist. David Gedge, front man of legendary British band The Wedding Present, once confessed: “I’m not sure how just two people manage to make such a big sound!”   The life of Schwervon! spans five albums and four seven inches. Their first two albums (Quick Frozen Small Yellow Cracker, Poseur) we’re released in the UK on Shoeshine Records. Shoeshine is an independent label, based out of Glasgow, Scotland. It is operated by Teenage Fanclub drummer Francis Macdonald. In 2007 their third release, I Dream Of Teeth, was released in Germany on Berlin based label Haute Areal. The follow up, Low Blow, was released on Sitzer Records out of Cologne in 2009.   A seven inch single of the songs Blood Eagle and Wrath of Angels was released on Brokers Tip Records in the fall of 2017. Brokers Tip is an independent label run by Bob Nastanovich, former member of the bands Pavement & Silver Jews.