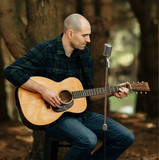 Roots/Americana musician and songwriter Garrett Heath has focused his craft by way of soulful imagery and an honest voice. He's a proponent of Dostoevsky's maxim that "beauty will save the world" and often journeys listeners into the mysterious union between joy and suffering in his songwriting.

Raised with a thorough appreciation of American roots music, Garrett began playing guitar and writing songs in high school. His debut album 'Whisper in the Dark' sparked a tour of the eastern US in 2013. His music was also featured on the 2014 feature film, "Potential Inertia" (OneFishFilms).