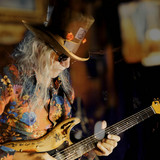 Born 1945 son of welthy parents. Mother was a skilled pianist. As a boy I began to play clarinet, guitar and later organ and much later cello doublebass and about everything I could lay hands on. As the youth movement gained speed about 1967, Dylan, Hendrix, Beatles and Stones filled the air and Lennon told us what it was about. I was a carpenter but dropped out in 1970 joining the Danish Summerfestival in THY. Here I was named Tømrerclaus (CarpenterClaus) becaus of a lot of Claus's. I brought my tools and my guitar gear. Soon I became a "figure" in the summercamp selling sandwhitces and playing music in times of no customers. After the camp I went to Copenhagen. Soon I became a member of a band (Skousen/Ingemann) that became the most succesfull band after 1970 in DK. I started Karma Music Studio & Records which still exist . Late in my carerer I began to sing and became a songwriter. That was after the album ”En Spade Er En Spade”. My latest album (Slow) (instrumental) is kind of different as it is mainly covers of very melodic songs. I love it, so I guess that a Slow mrk. II will surface later on. So here I am today 2020 at 75 years. Making music digging deeper into and behind the art of music. TømrerClaus. More here: http://toemrerclaus.dk/