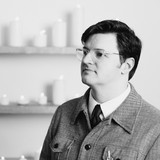 Mike Adams at His Honest Weight

There Is No Feeling Better, the fourth album from Bloomington, Indiana's Mike Adams at His Honest Weight finds the titular Adams—the singer/songwriter/multi-instrumentalist/producer at the center of the independent pop institution—focused less on who he is and more on where he is. Though the album’s not short on truthful introspection, it’s an outward gaze that defines these eleven songs. In their hovering melodies and warm tones, Adams tries to make sense of an increasingly baffling world. He comes up with a couple of answers, but more often than that, he’s come up with good questions: “What if I was wonderful to love?” Could a modest getting by be enough to build a life? What if our best guesses turn out wrong? Who’s going to remember us when we’re gone? Why is it so hard to tell the difference between the good guys and bad guys? It’s the kind of record you can make only after really knowing how to make records. It’s ambitious, but never labored sounding, sweeping but always intimate. All the qualities that have made the Adams songbook such a joyful collection to engage with—the witticism of 2011’s Oscillate Wisely, the playful experimentalism of 2014’s Best of Boiler Room Classics, the gigantic melodies of 2016’s Casino Drone—are on display here yet again, but they feel heightened, deeper, funnier, sweeter, and more resonant. With There Is No Feeling Better, he’s gathered up his ideas and given them names. He’s figured the sounds out. - Jason P. Woodbury