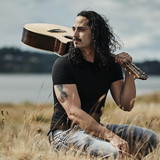 While singer/songwriter Sami Chohfi is based in Seattle, he is undeniably a modern citizen of the world. Known for his charismatic stage presence and ability to captivate a live audience his debut solo album, Extraordinary World, tells a story written across six countries. His songs and videos are featured on MTV and the Rolling Stone. From his journeys across the globe to tours with his band Blue Helix across Brazil, Chohfi’s songwriting takes a rock upbringing and spins it with musical influences from around the world. Blending alternative rock, folk and acoustic songwriting, Extraordinary World showcases Chohfi's ability to inspire his listeners by transporting them into the majestic scenes he’s witnessed over the past few years, whether in Cambodia, France, India, Kenya, or The Philippines.

Sami's music videos "This Majesty & "Dirty Your Soul" filmed in India were recently featured on the Rolling Stone India. "With every song being born in a different part of the planet, the one thing I can tell you is we are not as different as we think," Chohfi says. "I am constantly reminded how all people just want to fit in, be loved, and be understood. This album is a culmination of the last two years of my life and the beautiful interactions with people I have treasured.” As of October 2021, Sami is on his 4th tour in Brazil.