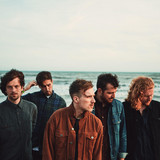 Hailing from the shores of the North East coast, Cape Cub started life as the solo-project of award-winning UK songwriter and producer Chad Male. From humble beginnings as a bedroom project, to the daytime dreams of arena shows, Cape Cub is a band with its wave almost set to break. Chad initially garnered a tidal wave of online attention with his song Swim. Recorded in his mum’s loft, the song inhibits a haze of atmosphere and found its way to the top of the Hype Machine chart and gained national airplay via Radio 1. He released the Closer and 6am EPs as an introduction to his heartfelt and grippingly spacious sound, before retreating back into his studio to carve his way forward. A synch agreement with Lava Records in LA led to Keep Me in Mind from the Closer EP featuring on American TV shows Grey's Anatomy and Deception, and after a trio of singles for LAB Records - Flowers, Searchlight &amp; Come Around - Cape Cub 2.0 was launched, with the first full-band single Moonglow premiered by Live Nation's 'Ones To Watch'. Building on supports with the likes of Fickle Friends, The Temper Trap, Picture This, Sunset Sons, We Are Scientists, Peace and Clean Cut Kid, the latest raft of Cape Cub headline shows have been nothing short of euphoric, with Chad explaining: “The last few shows have been an absolute dream. No one can tell you how it feels to have your songs sung back at you like that. We can’t wait to get back in the van and play our music for you all.”