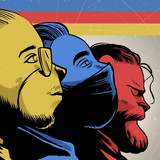 Russian-born trio Teddy Killerz has continually broken boundaries since their inception, trophying a formidable discography and executing numerous international tours while showing absolutely no sign of stagnation. Through a widespread set of releases on legendary labels such as OWSLA, RAM, Monstercat, Souped Up, Eatbrain, Vision, UKF, the team has proven time and time again that they are an undeniable force to be reckoned with. As the development and exploration of their own style, they have done numerous collaborations with artists from non-D&B world such as Funtcase, The Bloody Beetroots, Dion Timmer, Kompany, Dope D.O.D & many others. Teddy Killerz has built a reputation as a great remixers having been called upon by Skrillex, Modestep, The Prodigy, Noisia & many others to bring their furious energy to some of their biggest records. In addition to their extensive discography, theyʼve successfully completed numerous tours around the globe. Amongst these tours were performances at some of the worldʼs most electrifying festivals such as EDC Las Vegas, Electric Forest, Boomtown, Frequency FM4, Dour, Mysteryland, and Let It Roll, further carving their names into the halls of the exponential bass music scene that we all know and love. If youʼre unfamiliar with Teddy Killerz, be prepared for an absolute takeover on the dance floor, in your cars, in your home speakers and quite frankly anywhere with volume.