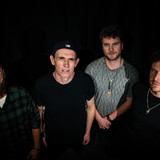 Swerve City is a band from Auckland, New Zealand drawn together by fate. Their new single ‘Conspiracy’ lyrically plays with the motivations of conspiracy theorists. Featuring Lee Mackley from Crooked Royals, ‘Conspiracy’ musically slams as their heaviest release to date. Adam Forsdyke (Drums) hopped into an Uber one night, driven by the unsuspecting Kevin Ashby (Lead Guitars, Vocals). Around the same time, Shannon Coulomb (Bass) and JP Carroll (Guitar, lead vocals) were toying with the idea of creating something new, to accompany the pair’s respective solo projects (Impostor Syndrome, Arrays). JP and Kev shared the stage when their former bands (Armed In Advance, Fire At Will) had played shows together several years prior. At Swerve City’s first band meeting it was discovered that, unbeknown to them both, Shannon’s parents had purchased Adam’s grandparents’ house. The scene was set. Swerve City is on a mission to create music that is a salve for life’s problems. The band stands for loyalty, camaraderie and humility; Four would-be comedians on the same page, one where openness to opportunity is valued, and the word ‘no’ has been removed from the vocabulary. Thoughtful and ambitious, vehement and assured, Swerve City is a band with a plan, and all the pieces are falling into place.