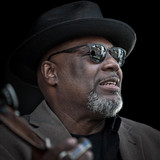 Award-winning bluesman Big Daddy Wilson is a U.S.-born vocalist and songwriter based in Germany. Possessed of a rich, emotionally honest, spiritually resonant crystal-clear baritone, Wilson performs originals and covers in genres ranging from Delta and Chicago blues, gospel, jazz standards, and reggae, all of which are rendered equally in his soulful delivery. His versatility is in his DNA, emerging from the soil of his small North Carolina hometown -- where he listened to gospel and country -- and from the military bases of Germany -- where he first heard the blues -- to the stages of Europe, where he's collaborated with a wide range of players, writers, and singers including Eric Bibb. Though he'd been gigging in European clubs for nearly five years, his debut album didn't appear until 2004 when Hungary's Crossroads label issued Get on Your Knees and Pray backed by the Mississippi Grave Diggers -- a Hungarian blues band. With the exception of two acclaimed dates for France's Dixie Frog Records, he has been most closely associated with Germany's Ruf Records since 2009, which released his international breakthrough Love Is the Key. 2017's Neckbone Stew registered on the global blues charts in physical sales and at streaming, earning Wilson stage appearances at some of the most prestigious blues and jazz festivals across the globe. Big Daddy Wilson was born Wilson Blount in Edenton, North Carolina and raised by his mother and grandmother. As a child and a teen he worked the cotton fields and on tobacco plantations, spending his spare time in church where he sang in the choir. He quit school at 16 and joined the U.S. Army a couple of years later. In Edenton he listened to music only in church and on the local country radio station. While stationed in Germany, he took in a blues concert, and it changed his life. Though he was painfully shy, he made himself network on the blues scene in Germany and got his first stage exposure there. As other American bluesmen and jazzmen discovered (from Dexter Gordon and Eddie Boyd to Luther Allison and Champion Jack Dupree), Europe was more hospitable to African-American roots musicians than their homeland. After gaining a following (and his military discharge) in Germany, Wilson began haunting the clubs of Europe. Hungary's Crossroads label paired him with their all-star blues band the Mississippi Grave Diggers to issue his debut, Get on Your Knees and Pray. The set was a contrast in textures as Wilson duetted with Andrea Orosz (the band's lead vocalist), and found airplay on radio stations and at military bases throughout Europe and Asia. That same year he cut a follow-up with Doc Fozz (guitarist Wolfgang Feld) entitled My Day Will Come. With both records in the can, Wilson hit the road hard, playing any club that would have him, and garnering prized festival spots where he expanded his fan base. In 2009, he signed to Germany's Ruf label, where he issued his international breakthrough Love Is the Key, earning him prime placement in clubs and more prominent spots on blues and jazz festival stages. He dropped 2011's celebrated Thumb a Ride for the label before Dixie Frog came calling: his next two offerings, 2013's I'm Your Man and 2015's Time, were issued by the prestigious French boutique label. Though his Ruf titles expanded his audiences and allowed him to tour not only Europe but the U.S. and Asia as well, the French titles saw his first real action on the digital charts. Wilson returned to Ruf for 2017's Neckbone Stew, an album that won airplay globally and resulted in his best sales to date. Ruf kept Wilson on the road for the better part of the next two years, dropping three different live offerings on the public over the same period: his own chapter in the label's Songs from the Road series appeared in 2008, while Live in Europe from Bremen to Paris and Live in Luxembourg at L'inoui were both released during the early months of 2019. Wilson returned to the recording studio in the summer of 2018 doing pre-production in a Memphis studio with Grammy-winning producer Jim Gaines (Stevie Ray Vaughan, Santana, etc.), guitarist Laura Chavez, and bassist Dave Smith. Proper recording took place in December at Gaines' Bessie Blue Studios in Stantonville, Tennessee -- in a room that had previously hosted the talents of American music luminaries such as Duane Allman and Etta James. Though his previous work had been primarily acoustic, Wilson sought a vintage electric R&B vibe for the date. The final product, released as Deep in My Soul, was issued by Ruf in April of 2019.