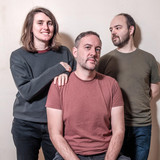 Featuring the matter-of-fact vocals and incisive lyrics of Emma Kupa, the Cambridge trio Mammoth Penguins play energetic, bouncy indie rock but aren't afraid to take chances, as shown on the synth- and sample-laden concept album John Doe. Kupa played bass and sang in the band Standard Fare, who broke up in 2013 following an eight-year run, during which they toured extensively and released two albums. After the split, Kupa pulled up stakes and moved from her hometown of Sheffield to Cambridge. Once there, she briefly pursued a solo career, recording a solo EP, Home Cinema, and a single with singer/songwriter Darren Hayman. By the time Home Cinema was ready for release in early 2015, Kupa had already lined up a new project. Taking up the guitar, she recruited bassist Mark Boxall and drummer Tom Barden to form Mammoth Penguins, a crunchier, more straight-forward take on indie rock than Standard Fare had been. Their debut single, "When I Was Your Age," was released in June 2015, and an album, Hide and Seek, arrived a month later on the Fortuna POP! label. The band returned in 2017 with the "A Simple Misunderstanding" single for Kingfisher Bluez; then they endeavored to make a record that stretched their punk-pop sound. Under the name Mammoth Penguins & Friends, they recorded a concept album about a man who faked his own death and then returned ten years later. Titled John Doe, it featured contributions from Haiku Salut's Sophie Barkerwood (programming/samples), Russell Lomas (violin), and Alto 45's Joe Bear (samples/synths). The record was released in late 2017 on the wiaiwya label. This experience led the band to want to expand their sound on their next album. To that end, the trio welcomed back Bear to play a variety of keyboards and added guitarist Faith Taylor, whom Kupa played with in the band Suggested Friends. The resulting record, There's No Fight We Can't Both Win, was a hybrid of their first two and was released by Fika Recordings in early 2019. ~ Mark Deming & Tim Sendra, Rovi