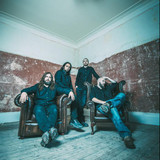 Ramage Inc are a progressive metal band from Scotland who have earned a place as one of Europe’s must-see acts. With three accomplished albums ( Feel the Waves, Earth Shaker and Under the skin)

under their belt, they have played on some of the world’s most sought-after stages including ProgPower Europe, Download and Bloodstock UK. The brainchild of producer, vocalist and guitarist Bryan Ramage, the band deliver sophisticated metal with power and passion. Their material is technically wonderful and will lift you off your feet and take you on a journey through dark and light. The band’s 2018 album Under the skin has seen the band mature and achieve a quality attracting attention from across the music industry and more importantly – the metal community. 2020 will see the band explore the world again as they are no longer “Scotland’s best kept secret”.