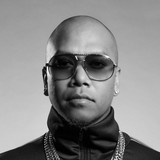 From humble beginnings in South America, the Suriname native cut his teeth in the Netherlands, being crowned ‘The King of Mixing’ in reference to his ability to play multiple genres with mind blowing energy tricks and transitions. He is undoubtedly one of the most important figures in Netherlands music culture by way of his pioneering ‘Dirty Dutch’ sound, which gained pop success with his UK top 10 and European hit record ‘I’m in Miami Bitch’ with LMFAO catapulting Chuckie to playing at some of the most recognised venues and main stages in the world including at Tomorrowland, Coachella and EDC, all whilst holding various residencies across the world. Chuckie’s has carved a reputation of being a monster producer, with a Latin GRAMMY award, 2 MOBO awards, MTV Awards and a litany of Gold and Platinum sales awards in his wake, transcending genre, with records reaching from Hip-Hop, Latin, EDM, to House music and Techno. His versatility and originality also lead to him being commissioned to rework records and write with industry leading names such as Michael Jackson, P. Diddy, Rihanna, Deadmau5, J Balvin and many more. With his ability to reinvent himself, it is no wonder than Chuckie, continues to be one of the most sought after artists across the globe, promising to be rocking crowds at every corner, once the world returns back to normal.