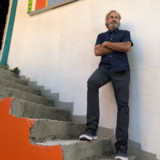 Doug is driven to create music that is quirky, fun, thought-provoking, and in some way inspiring.  He has been inspired by some of his favorite musicians: the Talking Heads, Devo, Weird Al Yankovic, and Frank Zappa.   Doug began his music career in 1982 with the Los Angeles band, Split Image and was signed to Allied Artists Records. In 2012 his band Naked in Public opened for Cyndi Lauper at the Britt Festival in Oregon.  Most of his professionally released songs were recorded and produced by legendary producer Sylvia Massy (Red Hot Chile Peppers, Prince, Tom Petty, Johnny Cash).    His songs with his bands Naked in Public, Lucky Doug and the Stinkbugs and Lucky Doug Fergus can be found on Pandora, iTunes, Spotify, Apple Music, Amazon Music, Deezer, Youtube and have been played on Sirius XM “Rodney On The Rock” and hundreds of college radio stations across Canada and the US.    Doug tries to release one song per month and so far (August 2021) he's keeping on delivering more fun, quirky, witty, ear candy indie rock.