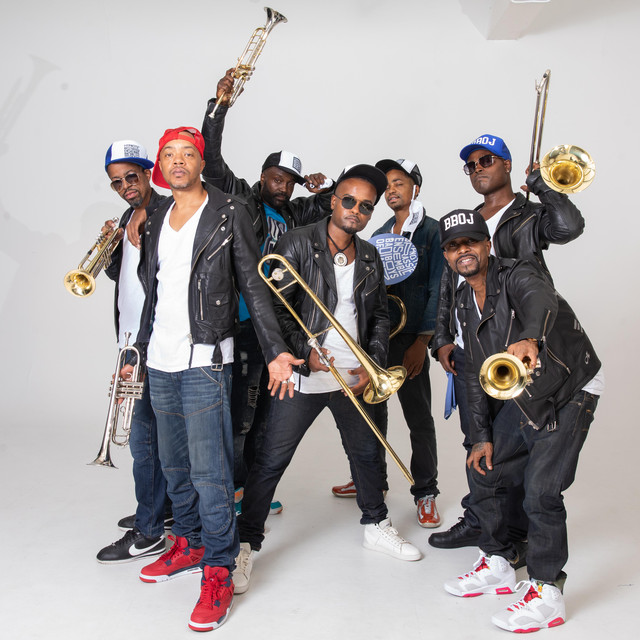 Hypnotic Brass Ensemble -- an eight-strong cohort of horn-playing brothers (plus one unrelated drummer) who take their stylistic cues from jazz, funk, hip-hop, and various strains of world music -- started out playing on the streets of Chicago, New York, and elsewhere, selling their self-released CDs and gradually building a loyal following and an international profile. The youngest of some 23 children -- the offspring of different mothers, but all sons of jazz trumpeter and composer Kelan Phil Cohran (a member of Sun Ra's Arkestra and co-founder of the Association for the Advancement of Creative Musicians) -- Gabriel Hubert (trumpet), Tycho Cohran (sousaphone), Amal Hubert (trumpet), Uttama Hubert (euphonium), Saiph Graves (trombone), Jafar Graves (trumpet), Seba Graves (trombone), and Tarik Graves (trumpet) all grew up together in Chicago, watching their father rehearse with his band Circle of Sound, playing together in the Phil Cohran Youth Ensemble, and later writing rhymes as the rap group Wolf Pak. Following the 1996 death of one of their older brothers, which shook up the family and prompted some of its farther-flung members to return to their hometown, the brothers, then mostly in their teens, began to coalesce into a more focused and business-oriented group. They started setting up around Chicago's streets and El stations to perform their original, collectively developed compositions, which call to mind the sound of traditional New Orleans big-band jazz and nod to the avant-garde angularity of their father and his contemporaries, but are equally informed by the rhythmic drive and accessible simplicity of hip-hop. Later they began recording and self-releasing CD-Rs, beginning with 2004's Flipside (aka Orange) and 2005's Jupiter (Green) -- the band's early releases all feature the same cover photograph and eponymous title, so they're referred to by the color of their sleeves and the names of key tracks -- which eventually sold hundreds of thousands of copies entirely through self-promotion. After relocating to New York City, touring worldwide, and gigging with the likes of Mos Def and Erykah Badu, they caught the ear of Honest Jon's Records' Alan Scholefield while playing on the street in London, thereby initiating a fruitful partnership that resulted in several single releases and a handful of live and recorded collaborations (including a session with Afro-beat legend Tony Allen and dates supporting Blur). In 2009 Honest Jon's issued their first widely available full-length: yet another self-titled album, primarily featuring re-recordings of their earlier material, along with renditions of Moondog's "Rabbit Hop" and their father's "Alyo." Although the group has played with several different regular drummers over the years, including Christopher Anderson and Gabriel Wallace, most of the rhythm duties on this release were handled by likeminded British hired guns Sola Akingbola (Jamiroquai) andMalcolm Catto (Heliocentrics.) ~ K. Ross Hoffman