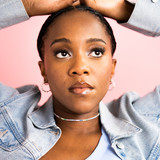 Rachel Chinouriri (@rachelchinouriri) is a 22-year-old singer/songwriter from Croydon. ‘November’ follows Rachel’s latest EP ‘Four° In Winter’ and subsequent singles ‘Through The Eye’ and ‘Darker Place’ as well as collaborations such as ‘Beautiful Disaster’ with SAM DOTIA and ‘The River Bend’ with Subculture, which was championed by Michaela Coel during her critically acclaimed series ‘I May Destroy You’. With over 6 million streams on Spotify alone and ongoing support from Spotify and Apple Music, Rachel has been applauded and praised by the likes of Radio 1’s Annie Mac (featuring as her ‘New Name’ on BBC R1’s Future Sounds), DAZED, NME, DIY, Colours and many more. Rachel has also proved her prowess as an incredible live performer, whilst supporting the likes of Celeste, Sam Fender and Lianne La Havas