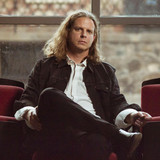 "When I was in grade 8, I made a deal with a classmate that if she gave me one of her lunch snacks, a Passion Flakie, I'd mention her name during my JUNO acceptance speech. I set the bar pretty high as a cocky 13 year old, but in a way it became a driving force in my life, to make good on that promise." With that childhood promise fulfilled as a member of The Strumbellas, drummer Jeremy Drury sought to expand his musical horizons and build on his accomplishments with his debut solo album, Company Store. "I’d done so much, been to so many places, met so many wonderful people... achieved and exceeded goals I never really imagined possible. The concept of doing my own record has been with me for years. I've been writing songs since I was a teenager and had always dreamed of putting out my own material - but my confidence behind the kit kept me from facing the fear that goes along with being so exposed as both a singer and a songwriter.” Before joining The Strumbellas, Drury spent almost 10 years in and out of various bands in Toronto's club scene, playing with indie, alt-rock, folk, and punk groups. He lets this melting pot of influences show in his songwriting. From The Travelling Wilburys to Propagandhi and Fred Eaglesmith to Pink Floyd, the result is a folk-rock sound leaning into the alternative that occasionally sticks it's toes in americana, structured with a pop sensibility, complete with big hooks and sing-along choruses.