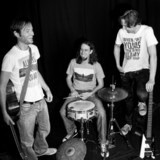 English Mpath is a three-piece band from three nations, two singers singing songs of duality and unity. The band consists of London record producer Martyn Phillips, New Zealand singer-songwriter Mathew James White & German drummer Philipp Renz and draws on influences such as Calexico, Elvis Costello & Neil Finn to craft their blend of alternative Rock / Folk / Pop. Using guitar technology, the live sound is highly dynamic; from intimate acoustic to full-blown production that gives the impression that there are at least two more on stage. The band’s conception dates back to when Martyn & Mathew met in London in 1999. It was during that time that they penned their first song. They continued to write and record, getting together with Philipp in 2007 to release the EP ‘Semi Naked’ and start touring. Further releases have been the single ‘(Who Will Get the) Marvin Gaye’ in 2008, the albums ‘Gravity’ in 2009, ‘Elevate’ in 2010 & ‘Life of Learning’ in 2016. London based Martyn made his name producing several major hit records, including London Beat’s “Thinking About You” (which got to number 1 in 24 countries including Germany & the USA), Jesus Jones’ “Right Here , Right Now” (USA number 1), “Chorus”, a UK number one album for Erasure and hit albums for Roachford and The Beloved. His productions have sold into the millions worldwide. Berlin based Mathew, has been touring Europe non stop as a singer songwriter since 2005, while Phil practices paradiddles in southern German.