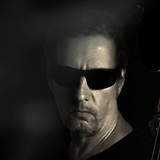 Inspired by “Evanescence, Sirenia, Nightwish and Tarja“ Wolfton operates musically in the Symphonic Metal and Alternativ Rock area. A perfect sound was formed through to deep guitar tones, powerful drums, the distinctive voice of Wolfton, complemented by strings and choirs. Wolfgang Schmidt from Heilbronn (Germany) has been working as a sound engineer for television and the music industry for over 20 years. That’s where the name Wolfton comes from. The German word for the sound is “Ton”-

Wolfgang works for the sound – therefore Wolfton. When in March 2020 the television and event industry came to a shutdown due to the Corona pandemic, Wolfton also had no job for more than 3 months. No more musicians were recorded, now Wolfton made music himself. From the composition to the finished music video, everything was produced by himself. Only a cameraman was on site to record the pictures. The first single that was produced during this time is “Fly Away”. The lyrics are about the Corona pandemic time. But that’s not supposed to be, Wolfton will soon tackle the next single. The goal is to complete an album and to have concerts with a complete band.