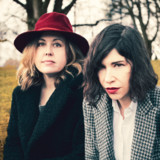 Sleater-Kinney first emerged from Olympia, WA in 1994. The group’s 1997 landmark album, Dig Me Out, earned a spot on Rolling Stone’s “The 500 Greatest Albums of All Time.” During 2015, they returned from a decade-long hiatus with the triumphant No Cities To Love. It closed out 2015 on dozens of year-end lists, reaching #1 for The Daily Beast and The Skinny. Most recently, they teamed up with St. Vincent to produce 2019’s The Center Won’t Hold. Throughout their career, the band have sold out shows on multiple continents. They will be releasing their tenth studio album, Path of Wellness, in June of this year.