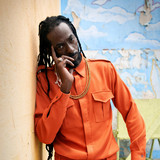 Buju Banton was one of the most popular dancehall reggae artists of the '90s. Debuting with a series of popular dancehall singles, Banton converted to Rastafarianism and revolutionized dancehall by employing the live instrumentation and social consciousness of classic roots reggae. He first adopted the approach on his 1995 classic 'Til Shiloh, which raised hopes among his fans that he would become dancehall's great international ambassador, as Bob Marley had been for roots reggae.

Banton remained a high-profile star into the new millennium.