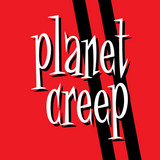 Planet Creep was a trio, consisting of Reem Groot (guitar, vocalist), Bertwin v. Avezaath (drums) and Rogier Weenen (bass). The band lived from 2001 until 2007. All songs were self-made, self-produced and on top of this, the act was genuine. Surf and garage rock means high energy and high sounds and it is not played for fame and fortune. Keywords: rough, tough, dirty, greasy, porn, romance, hotrods, movie score, humor, sci-fi, mystery, melancholy and fresh motor oil covered californian surf waves. Planet Creep made a deliciously pounding and rattling mix of surf instrumentals and garage rock with a touch of sci-fi and rockabilly and did this in an incredible way. Planet Creep sticked to those all-time style elements such as a slightly out of tune squealing, shrieking sound of the guitar, the wining jangling twangs of the bass. And drums, yes the drums are like a stampede of wild animals that ran amuck.