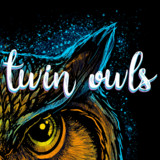 Dream pop from Yorkshire, UK. Dreamy guitars, swirling delays dancing in reverb and lush synth sounds. Twin Owls' sonic palette takes inspiration from artists such as M83, The Naked And Famous, Passion Pit, Augustana and Hammock. Twin Owls returns to the dream-swept landscape of love and wanderlust, heartbreak and new beginnings on their latest single ‘Snowfall’. Crafted in the hands of a single artist, it’s a shining example of how homespun DIY recordings can still have the sonic breadth and resonance to fill oceans of infinite space. The single is taken from Twin Owls’ second album ‘Ultraviolet’ which shifts the focus from the themes of travel explored on debut ‘Lightstreams and Daydreams’ to the peaks and pitfalls of a relationship. A sense of longing to escape is crystallised in the intricate lines of guitar, leaving trails across the surface of sensual keys and bass. Twin Owls’ rich dream-pop takes influence from a vast range of legendary and contemporary artists. Pearls of Kate Bush echo in the instrumentation, whilst the songwriting reflects the sensibilities of bands like M83, Silversun Pickups and Augustana. After being featured on the BBC Introducing line-up in Leeds, the sky’s the limit for this one man band. It’s time to take heed of his pleas for boundless freedom and dive into the great unknown. Brand new album ULTRAVIOLET out now. https://linktr.ee/twinowlsmusic