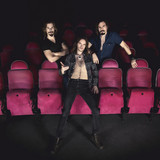 The three-piece originally formed in 1999, by then 14-year old David, Stevo and Olly, whereas their debut took place 4 years later in 2003 shortly before the band startet to record their debut-EP "Girl Power". After the farewell of singer and guitarist Stevo (Reverend Backflash), Alex joined in 2004 with whom the band recorded the second EP "Flesh" in 2005. From thereon Brewtality started to gain live experience, playing gigs from pubs to festival until Olly left the band due to personal reasons. With their new drummer Ben, the band recorded their first full-length album Giant Dose, which was released via "Tempel Records" in 2016. Shortly thereafter Ben was replaced by Berni (Cil City), with whom Brewtality is planning for the future.<br>