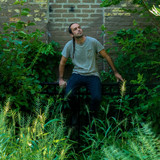 OPLIAM is a multi-instrumentalist whose music crosses all musical boundaries. He plays rock and roll, hip hop, and reggae. Sometimes described as Alter-Native Rock. OPLIAM has toured internationally, playing shows in Australia and New Zealand.   In 2021, OPLIAM played shows with The Halluci Nation fka A Tribe Called Red and Gogol Bordello. OPLIAM is Native American on his father’s side and has never forgotten where he comes from as a musician. OPLIAM’s family is Mohawk, originally from Kahnawake Mohawk Reserve outside of Montreal, Quebec.   In 2021, OPLIAM signed his first book deal with Penguin Random House. He is writing a book for a new nonfiction series for young readers that will tell the real history of the U.S, one that challenges mainstream histories. The book is slated for publication in the summer of 2022.   OPLIAM’s 2nd LP What Symbol Represents A Spirit was released July 2021. He is touring nationwide the rest of this year promoting the new project.