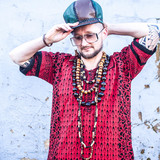 Russian born and London residing, DJ Vadim has built a reputation as one of the world’s top independent producers; travelling the globe, performing and collaborating with established and developing talents that cross continents, languages and cultures. Dubbed as the "John Coltrane of hip hop", Vadim has become well respected as an innovator in a number of areas during his career, "a veteran presence in the DJ community as well as one of the foremost producers in too many communities to count, Vadim is never running out of ideas" (URB Magazine). He has been described as "one of the few artists creating genuinely new work in the hip hop field" and an artist "who cannot be ignored". The journey began in 1992, the Russian ex-pat bought a sampler and started working on the music that would become his debut.

In 1994, Vadim founded his own independent record label, Jazz Fudge. The following year he was signed to Ninja Tune which culminated in his debut LP USSR Repertoire. From these early recordings have come 16 more albums and that doesn't include production for groups he was part of like 7n7c with whom he was nominated for the Latin Grammy’s in 2002. For a pedigree artist with such a long musical history,