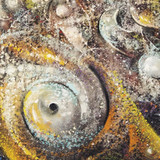 In 2011, the members of Audiolepsia decided to escape from common ground to compose music without barriers. Since then, the band choses instrumental post-rock as the tool to deliver their music. This is made of complex landscapes, where precious melodies are combined with full-force moments, building intensive and unforeseen atmospheres. At the end of 2013, the band releases their 1st album, Principio de Incertidumbre (Uncertainty Principle), a set of songs full of nuances and sensitivity. While the band didn't stop playing live, they began the compositions of their 2nd album, "Muses", released in May 2017, inspired by female icons which left a mark on the band guys. The band adds new acoustic sounds, string arrangements, and a wider structural variety with details close to math-rock and progressive rock, to its combination of guitar riffs and melodies . The band’s personal nature and their singular sound is definitely reflected in their 3rd album, "Waves & Particles". They've explored again new sounds and atmospheres, with spaces for improvisation and experimentation. Here, they've deepened in the creation of textures and in the duality of their compositions, in which the most delicate passages combine and contrast with others full of power and, sometimes, rawness. This duality is the origin of the album title, "Waves & Particles", in reference to the double nature of light. This is, as always, an invitation to the introspective journey of those who listen to it.