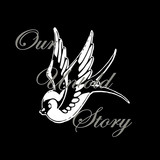 Our Untold Story are a punk-rock crew from Stockholm, Sweden and are currently based in London, united Kingdom. Formed in 2012 by singer-songwriter Xander Turian, Our Untold Story have published five official releases including “Our Untold Story: The Self-Titled EP” (2013), “OUS #TBT Live & Demos” (2015), “Go For Broke” (2016), “Calm Seas Don't Make Good Sailors” and “Sexy Blonde” (2017), as well as their upcoming “My Dreams, My Rules” (due 2018). Our Untold Story fans have come to expect a minimalist, upbeat style from OUS that has variously been compared to a blend of Dead Kennedys and the Doors crossed with '90s pop punk such as Green Day, the Hives, and the Hellacopters. Their tone ranges from raw and warm to clean and bright, from sharp and aggressive to grooving and rolling. This flexibility shows in the emotional texture of their songwriting and makes them attractive to a wide variety of audiences. Singer Turian has said