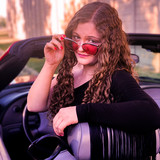 Katie Ray is a small town girl from Minnesota, who moved to Nashville to follow her dreams in country music. She grew up surrounded by her family's voices singing, so music came naturally to her from an early age. She began to play guitar and write songs at the age of 13. She then started performing across the state of Minnesota, and finally moved to Nashville. She has played at venues such as The Bluebird Cafe, Tootsie's Orchid Lounge, Tin Roof, Natchez Hills Winery, and Alley Taps. She has begun to find a voice of her own, and she can't wait to see where she'll perform next.