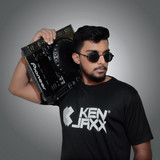 "When I was 5 years old, I played my dad's piano for the first time. That's the movement I realised that I wanted to be a unique partner in the music world." "KEN JAXX", is a DJ and a Producer from Downsouth, Sri Lanka. And he is known as the "King of House Music" with the popularity of his fans and he is a one of the popular EDM artist in srilanka. From early age, Ken had an interest in Music. At the age of 5, he begins to learn music theory. After he learned to play Piano,Guitar,Violin,Drums & train vocals too. After that he begins to study acoustic producing in 2012. Doing so he slowly grew up his Interest in EDM. In 2014, he saw a "Slam" live set by Martin Garrix, Which had inspired Ken Jaxx to begin EDM Producing & Djing. After , He started Djing In local parties. He usually plays House Music. Such as Progressive House, Future House & Tech House too. In 2019, He played his first EDM event, "Colours For Cancer", Organized by Ken Jaxx & "Young Blood". After, He played as a mainstage artist in "Wonderland Sri Lanka" and became a significant artist in the industry. In 2020 he released his first track "Escape (feat. Kylo)". This became a huge hit in Sri Lanka and Internationally. His MixCloud radio session called, "Edm Rumble" became Sri Lanka's Trending No.01 with it's first episode & also No.15 in World Charts. Bookings/Promo - kenjaxxmusic@gmail.com