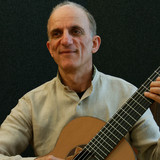 Virtuoso Magic is the title of a review of Germanys leading newspaper Süddeutsche Zeitung about one of his concerts. The English journal “Classical Guitar“ calls him a master in this field of music. Brazil’s renowned guitarist Paulo Bellinati says: Ahmed is one of the great musicians who, with their inspired playing, give new impulses to Brazilian music. Ahmed El-Salamouny is of Egyptian-German descent and is living in Munich Germany. He completed his classical music education under the direction of Professor Barna Kovats at the Academy of Music, Mozarteum, in Salzburg, Austria. Since 1981 he has performed in many important concert series. He travelled the Americas from the South of Brazil to Canada and played in such cities as São Paulo, Rio de Janeiro, Recife, Bangalore, San Diego, San Francisco, Portland, New York und Vancouver. TV and radio broadcasts as well as many CD-recordings bear witness to his high level of creativity and passion for playing. As one of the most important representants of Brazilian music he is invited to important music festivals all over the world. He has played with such outstanding musicians as Peter Finger, Claus Boesser Ferrari, Celso Machado, Peppino d`Agostino, Pedro Tagliani, Gilson de Assis, Claudio Menandro, Carlos Barbosa Lima or Duo Assad amongst others. Under his direction an international workshop on Brazilian music is held annually in Salvador, Brazil.