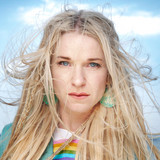 Sol Heilo is a Norwegian singer/songwriter, arranger and multi-instrumentalist. Her sound cannot be labelled as she is constantly exploring and continue to surprise her fans with a myriad of sounds and moods. Sol is a member of the former band “Katzenjammer” widely known in Norway as well as abroad with hits like «A Bar in Amsterdam», «Rock Paper Scissors» «Demon Kitty Rag” and has toured Europe for years. Sol has a huge fanbase both in and outside of Norway.

Her instruments are drums, trumpet, bass, guitar, melodic percussion, ukulele, domra, banjo, balalaika, zither, harp, flute, accordion, piano, harmonica and mandolin. Sol released her debut album "Skinhorse Playground" in 2017 with Propeller Recordings. The album features the singles ‘America’ and ‘Killing Karma’, with producer Hasse Rosbach (Moddi, Turbonegro, Team Me) calling in an eclectic mix of jazz composers, punk purists and LA-based session legends. October 2019 Sol released the EP “Unplugged Playground”; an acoustic release of some the songs from Sol Heilos debut album “Skinhorse Playground”. The EP also includes a stripped-down version of her latest single “Pieces To Play”. This acoustic sound is a pre-taste of what will come in 2020.