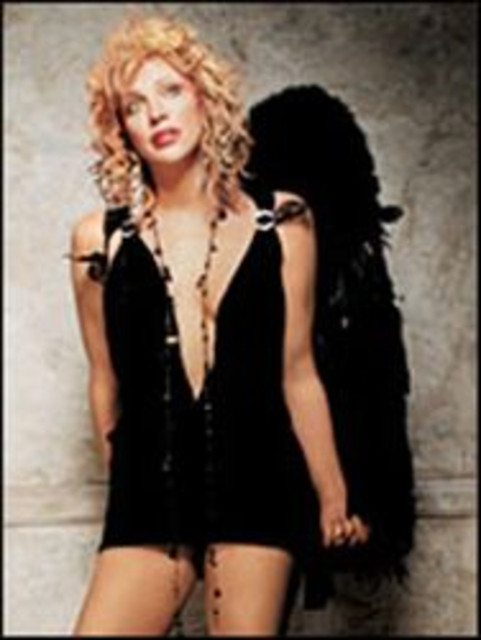 Love her or loathe her, the opinionated, brutally straightforward, and seemingly always controversial Courtney Love is one of the most notable figures in alternative rock. Born on July 9, 1964 in San Francisco, CA, Love was raised in Oregon. As a teen, Love began listening to new wave and punk, musical styles that would influence her band Hole. After traveling to countries like Ireland, Japan, and England, Love moved to Los Angeles, CA. In 1986, Love appeared as Nancy Spungen's best friend in Sid and Nancy, director Alex Cox's film about Sex Pistols bassist Sid Vicious and his lover Spungen. Love was also cast in Cox's Straight to Hell. Neither picture brought Love the stardom that she craved. Love then relocated to Minneapolis, MN, and formed the all-female post-punk group Babes in Toyland with Kat Bjelland. Bjelland eventually tossed her out of the band. After working as a stripper in Alaska, Love returned to Los Angeles and started Hole in 1989 with Eric Erlandson (guitar), Jill Emery (bass), and Caroline Rue (drums). Hole released their debut album, Pretty on the Inside, in 1991. A year later, Love married Nirvana frontman Kurt Cobain. Rumors of drug use between the two began surfacing in the press, and a Vanity Press article revealed that Love was using heroin while she was pregnant with their daughter, Frances Bean Cobain. In April 1994, Kurt Cobain committed suicide; two months later, new Hole bassist Kristen M. Pfaff died from a heroin overdose. Although it was recorded before those personal tragedies, Hole's second album, the ironically titled Live Through This, captured the searing pain and violent anger of somebody undergoing a tragic loss. Rumors persisted that Cobain co-wrote a large portion of the album, a claim that Love vehemently denied despite claims to the contrary by many of Cobain's closest friends. No concrete evidence was ever released to back those claims, and she maintained a semi-professional relationship with his former bandmates by forming a partnership with them called Nirvana L.L.C. The organization would control all Nirvana-related releases and try to protect the interests of the three parties, but strife between Love and the rest of the band developed through nasty press comments made by both sides. Meanwhile, Hole released Celebrity Skin in 1998, but the album came nowhere near the popularity of her previous effort. Despite the band's best promotional efforts (which Courtney dove headfirst into, as always), sales were discouraging enough for bandmembers to start dropping off, essentially dissolving the group while her acting career was taking off. In 1999, Love was nominated for a Golden Globe for her performance in the movie The People vs. Larry Flynt. She would stay relatively quiet for a few years, making a few film appearances and bragging up various projects with Louise Post and Kat Bjelland that never surfaced. But when former Nirvana members Krist Novoselic and Dave Grohl announced a 45-song Nirvana retrospective that would include two never released tracks, Love immediately brought them to court in an attempt to wrestle away the rights to the material. Manager/boyfriend Paul Barber tried to become the peacekeeper in the situation, even showing up at the studio for the mixdown of one of the unreleased songs. But Love moved to dissolve Nirvana L.L.C. and managed to stop the release of the album until the matter could be brought to court. The box set was aborted and the three individuals began to hype the upcoming court hearings like a boxing match, inviting the press out and making sharp barbs at one another in interviews. She announced her intentions to spearhead a Nirvana "greatest-hits" album à la the Beatles' 1, and claimed that she had hundreds of home tapes to go through and a journal that she planned on publishing. Love also began to speak out on musicians' rights, suing her record company and bringing to light unfair business practices on the part of the industry. She began making her interviews and speeches platforms for her newfound cause, and created quite a stir at the South by Southwest Music Conference in the spring of 2002 when she directly announced her intentions of starting a music industry revolution. All that was forthcoming, however (beside more eccentric publicity), was a solo album, 2004's America's Sweetheart, released on Virgin. The following year she began working on new songs, despite battling an alleged eating disorder and a stay in rehab after violating her probation by using drugs. Working with artists including producer Linda Perry, Billy Corgan, and guitarist Micko Larkin, formerly of Larrikin Love, the album Nobody's Daughter began to take shape over 2006 and 2007. In mid-2009, Love announced that Nobody's Daughter would in fact be a Hole album. She began promoting the album in earnest in early 2010, performing shows in Europe and the U.S. -- including gigs at SXSW and on The Late Show with David Letterman -- before its release. ~ Michael Sutton & Bradley Torreano, Rovi